The Valve Klipper is a 100% tube pedal based on the early '70s Laney Klipp and late '60s Marshall Plexi preamps. 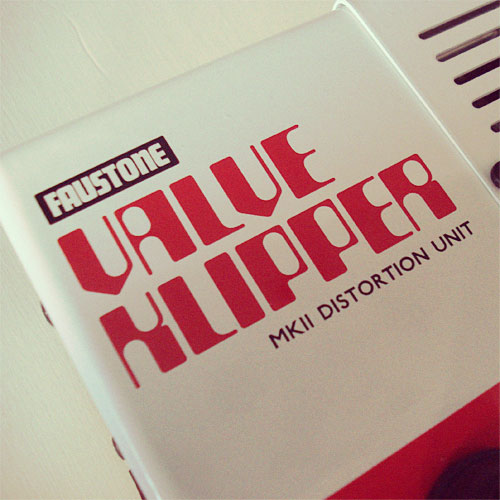 The Valve Klipper Distortion Unit started as a project developed for the D*A*M forum. The ambitious goal was to capture in a pedal one of the ingredients in the signature sound of Tony Iommi of Black Sabbath: the distortion circuit of the Laney Klipp amplifiers he played in the early '70s. I can't really tell if I succeeded, but what resulted was a peculiar stompbox with a sound that stands on its own.

The Valve Klipper is effectively two circuits in one: '68 Plexi-ish preamp (boost) and Klipp circuit (overdrive—distortion), in a pedal format and adjusted to drive the front end of other amps. Technically speaking, it adds two more gain stages to the existing preamp on your amplifier. This might not sound like much but it's actually a lot.

Unlike other tube pedals, it works at real tube voltages and has a dedicated power supply that feeds the preamp's plates with the correct 300V, as in the original Klipp amplifier. All the saturation comes from real tube circuitry. The unit is powered directly from the AC line and a 115V/230V switch on the pedal allows worldwide mains compatibility.

Two incarnations of the Valve Klipper exist, but the differences are only cosmetic, the electronic circuit and sound are identical on both:

The MKI version is big and chunky and takes a lot of pedalboard real estate, and it's the one I still play. MKIs were built using carbon composition resistors and ERO signal capacitors and feature huge Orange-style knobs.

The MKII's design is more polished and comes in a smaller and more professional looking enclosure. Among the changes in the radical makeover, the Klipp toggle switch became a footswitch, and LEDs were added. Also, the tubes were relocated inside a dedicated compartment, isolated from the rest of the circuit and accessible by removing a screwable lid at the top of the unit. The MKII version took me many months to develop, in which I tried many power supply configurations and built at least half a dozen prototypes.

Valve Klipper schematic and info. For educational purposes only. Please note that I'm not offering technical support if you want to build yourself one.

You may still find Faustone pedals in stock in the following distributors. Please contact them!