The Fuzz Unit is a replica of the rare Barnes and Mullins (B&M) Champion Fuzz Unit. 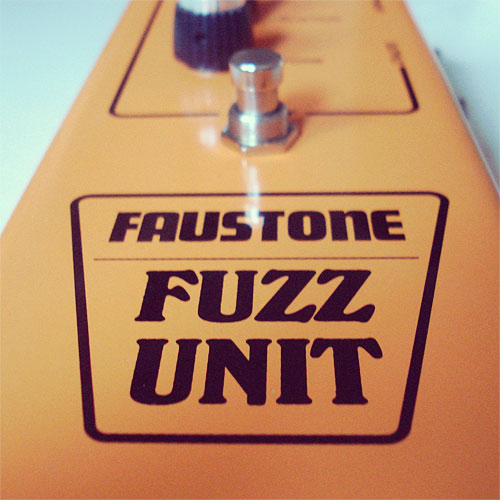 The Faustone Fuzz Unit is a replica of the rare Barnes and Mullins (B&M) Champion Fuzz Unit. The original pedals were built by Colorsound in London in the late 70s. Rebranded under many names —B&M, CMI, G.B., Pro’Traffic— electronically the circuit was the British cousin of the Electro Harmonix Big Muff, and —allegedly— it was featured on “A Girl Like You”, the Edwyn Collins hit single.

This Faustone version is based on my April 1977 original which was carefully dissected, studied and re-assembled. The circuit on mine is a tad different from the available Internet schematic, and features Zetex brand transistors instead of the ubiquitous BC184Cs.

The circuit is basically a clone of a Big Muff minus the fourth transistor position. In the Fuzz Unit, two ZTX383C transistors —with a gain of around 600— occupy the two first positions (Q1 and Q2). A lower gain transistor is used for Q3 —ZTX382B, gain of 150— which in my opinion is the key to achieving the characteristic musical flute-like sound of the original pedal.

Very much like other Colorsound pedals before, these late 70s “Tonebenders” were built into Wah-Wah enclosures, hence the shape and dimensions of the boxes. I cloned the box but I made it sturdier because mine is a bit dented after 30+ years of use. I had it powder-coated in bright orange and cloned the original silkscreening too.

These were hand wired on a RS tagboard because that's what I do. The last batch also featured LEDs and DC sockets, which are optional. Custom colors are also available.

Fuzz Unit schematic and info. For educational purposes only. Please note that I'm not offering technical support if you want to build yourself one.

You may still find Faustone pedals in stock in the following distributors. Please contact them!